Ultrasound in Obstetrics and Gynecology 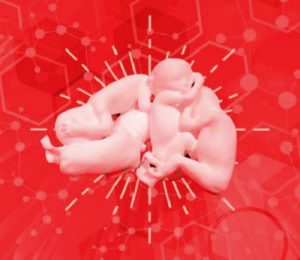 M.U. is a 32-year-old G2 P1 Caucasian female, who presented at 13 weeks’ gestation by LMP for first trimester combined screening. The crown-to-rump length measurement was consistent with 11 weeks’ gestation. The fetal body was noted to be small in comparison to the head and there was suspicion for ventriculomegaly. The placenta was noted to be thin. The patient was offered chorionic villus sampling (CVS) due to the increased suspicion of digynic triploidy. She declined CVS at this time but did agree to have NIPS performed. NIPS was reported as “high-risk due to low fetal DNA fr action” but was otherwise uninformative. The patient had a transcervical CVS performed two weeks later without complications.